Margo Sorenson talks about Color and Light today and everything else that Alessandra finds in Italy in her new book Secrets in Translation. This is not Margo's first rodeo on my blog. I interviewed her back in 2015! Interview is here if you'd like to see! https://daniduckart.blogspot.com/2015/05/interview-with-margo-sorenson.html  Since we just had a big art event she thought it would be fun to write about the visuals in "Secrets in Translation"! You can buy her new book here: Fitzroy Books more links after this post.


WHAT ALESSANDRA FINDS IN ITALY, BESIDES COLOR AND LIGHT


When Dani asked me to write about visual writing to create a sense of place, I was thrilled! After all, who doesn't love to pick up a book and feel transported to another destination? In my newest Young Adult/Crossover Adult (not "cross adults!" 😉), SECRETS IN TRANSLATION (Fitzroy Books), the setting in Italy is vital, because it serves as one of the key motivators for the main character, Alessandra. Italy itself is almost like an actual character in the book, and so I needed to make Italy vibrant and colorful for readers, so they could feel as if they were really there.

From the back cover: "Seventeen-year-old Alessandra returns for six weeks to Italy, where she grew up. Pressured by her parents into babysitting a rebellious twelve-year-old—ruining holiday plans with newfound American friends—Alessandra resigns herself to a tedious summer in Positano. Her babysitting gig, however, turns out to be anything but boring! Not only does Alessandra fall for the handsome son of the Bertolucci family, renowned for their limoncello production, but when a body mysteriously turns up on the beach, the influence of organized crime in Positano become frighteningly real. As Alessandra is drawn further into an elaborate conspiracy, she must risk everything to protect herself, her family, and those that she loves, and in the process, she finds herself—and her Italian heart".

The novel takes place in Positano, which, if you've ever been there, has one of the most stunning, drop-dead gorgeous views in the world.

So, when I set out to write a book with Positano as its background, of course words of sight, touch, scent, taste, and sound became some of my world-building blocks. Positano had to come alive for the readers, so that Alessandra's feelings about Italy and her journey would seem real.

Many of my readers have never been to Italy, so it was key to try and find vivid words for all the senses, beginning with sight. As you know, if you've ever been there, most of Italy looks nothing like the United States, so I had to paint with a detailed brush right at the beginning:

"My feelings churned as I looked out the window at the hills dotted with olive trees, the occasional random, crumbling castle, the tiny villages clustered around an ancient church bell tower, and the AGIP gas signs."


Once Alessandra and her employer family begin the drive to Positano, I wanted the reader to be able to grasp how unusually beautiful the setting is, because that setting actually nudges Alessandra into her realization at the end of the book (not a spoiler!):

"Two hours later, we drove through Sorrento across the Amalfi peninsula to the Amalfi Coast road and began the terrifying drive that I remembered vaguely from previous trips to the coast. The sheer cliffs dropped into the bluest sea imaginable. Tiny villages clung to the steep mountainsides, making me wonder how it was they managed to hang on."


As the drive continues: " Looking out the window, though, at the little shops and restaurants and the signs for each little cliffside town, a feeling of familiarity began to tug at me. The boys hanging out on the street, looking over a motorino. A gaggle of girls whispering outside a store. The plump figure of a nonna all dressed in black, market basket over her arm, making her way gingerly across the cobblestone street."

Readers would know instantly that this setting is so definitely not the United States! That realization is one of the keys to the plot. Once the visual is established, then come the all-important other descriptive words to create the atmosphere in depth, by using touch, sound, taste, and smell:

"But my smile faded as we hiked down the narrow, winding streets to find our apartment. I was back—I was really back. All around us, Italians laughed and gestured as they walked by us on the narrow sidewalks; motorinos and scooters whizzed past, drivers hollering to each other and at pedestrians. The familiar scents of Italy surrounded me—sweaty humanity, ancient buildings, the suddenly pungent fragrance of geraniums in window boxes, the acrid smell of benzina, and fresh bread wafting from bakeries. It was as if I’d never left."

Then, as Alessandra and the family settle in, the word choices need to create a renewed sense of belonging and positive feelings:

"We breakfasted on oranges and hard, crusty rolls and yogurt, sitting at the square table under the window, the Italian sunlight streaming in through the gauze curtains. Through the open window, we could hear the sounds of Positano waking up, people calling to each other, the cars braking and accelerating, and the high-pitched zoom of scooters."

Alessandra starts to relax and begins to enjoy being back in Italy: "I hated to admit it, but being out on the streets in Positano was fun. The fresh, salty breeze met us at open turns, encouraging us to continue down through the town to the shimmering blue sea. Shops displayed their wares on small tables outside their doors. Blue and yellow dishes, decorated with lemons, were stacked alongside woven sandals; light summer dresses, embroidered with lemons and flowers, hung outside the shops and fluttered in the sea breeze. Lemons were everywhere, it seemed."


As Alessandra begins to let her guard down about her Italian feelings, she finds that her journey to find who she really is becomes even more complicated…because of a dangerous conspiracy—and because of, yes, crush-worthy Carlo! As a writer, I hope readers are firmly planted in Italy by now, because of words used as building-blocks of color and light, so they can be with Alessandra on her journey back to Italy. Maybe they will discover their hearts are a little bit Italian, too!

Author of thirty traditionally-published books, Margo Sorenson spent the first seven years of her life in Spain and Italy, devouring books and Italian food and still speaks (or tries!) four languages. A former middle and high school teacher, Margo has won national recognition and awards for her books, including ALA Quick Pick Nominations, recommendations from Multicultural Review, and was named a finalist for the Minnesota Book Award in YA Fiction. After having lived in Hawaii and Minnesota, Margo and her husband live in Southern California. 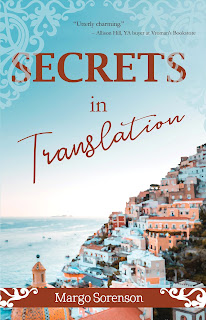 SECRETS IN TRANSLATION is available here: